It’s always been tricky for us to have LAMMPS users and developers work on Windows. We primarily develop LAMMPS to run on Linux clusters. To teach LAMMPS in workshop settings, we’ve usually had to redirect Windows users to Linux Virtual Machines such as VirtualBox or Unix-like compilation with Cygwin.

With the latest updates in Windows 10 (Version 2004, Build 19041 or higher), Microsoft has added a new way to work on Linux-based code. The Windows Subsystem for Linux (WSL). With WSL Version 2, you now get a Linux Virtual Machine that transparently integrates into Windows. All you need is to ensure you have the latest Windows updates installed and enable this new feature. Linux VMs are then easily installed using the Microsoft Store.

In this post, I’ll show you how to set up and compile LAMMPS for both serial and MPI usage in WSL2.

Upgrade to the latest Windows 10

Type “Updates” in Windows Start and select “Check for Updates”. 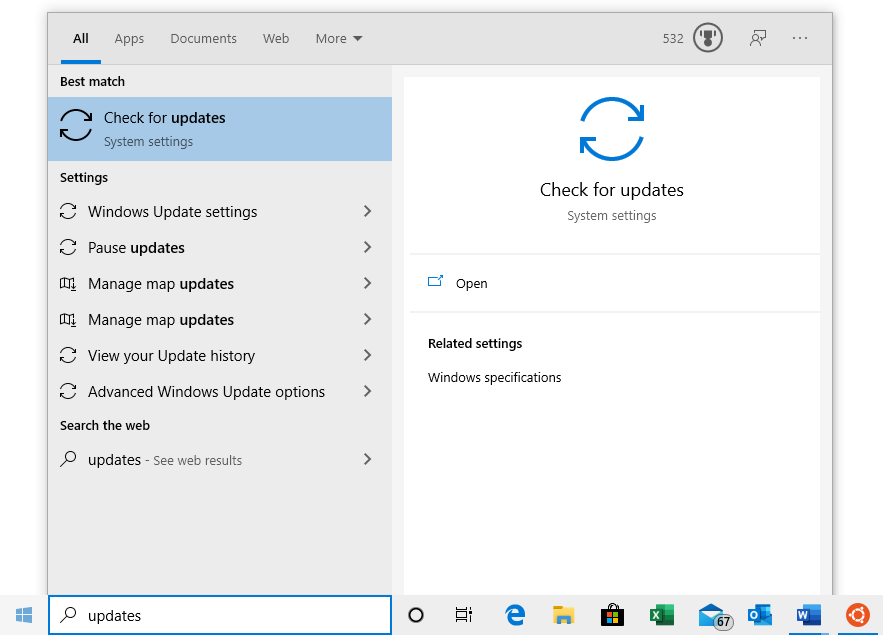 Install all pending updates and reboot your system as many times as necessary. Continue until your Windows installation is updated. 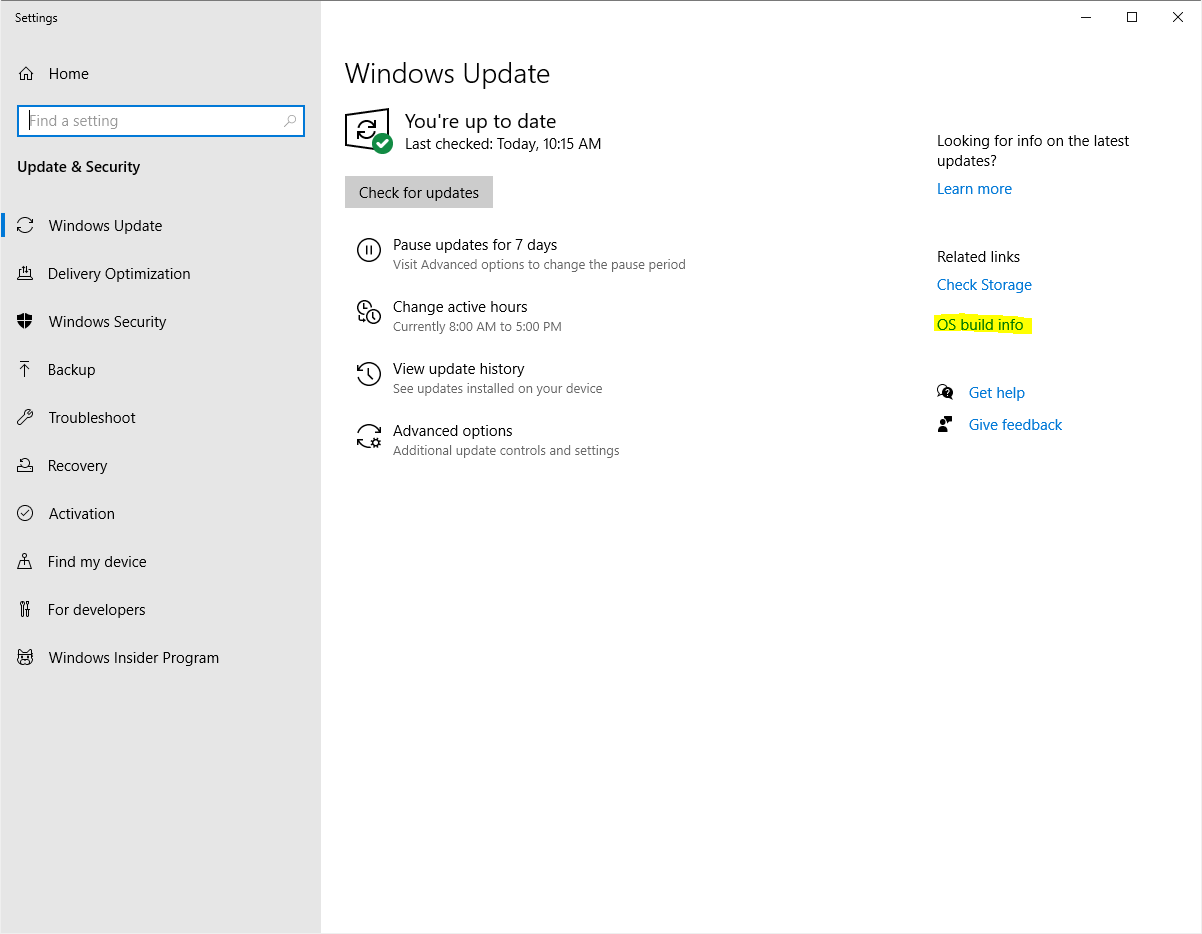 Verify your system has at least version 2004 and build 19041 or later. You can find this information by clicking on “OS build info”. 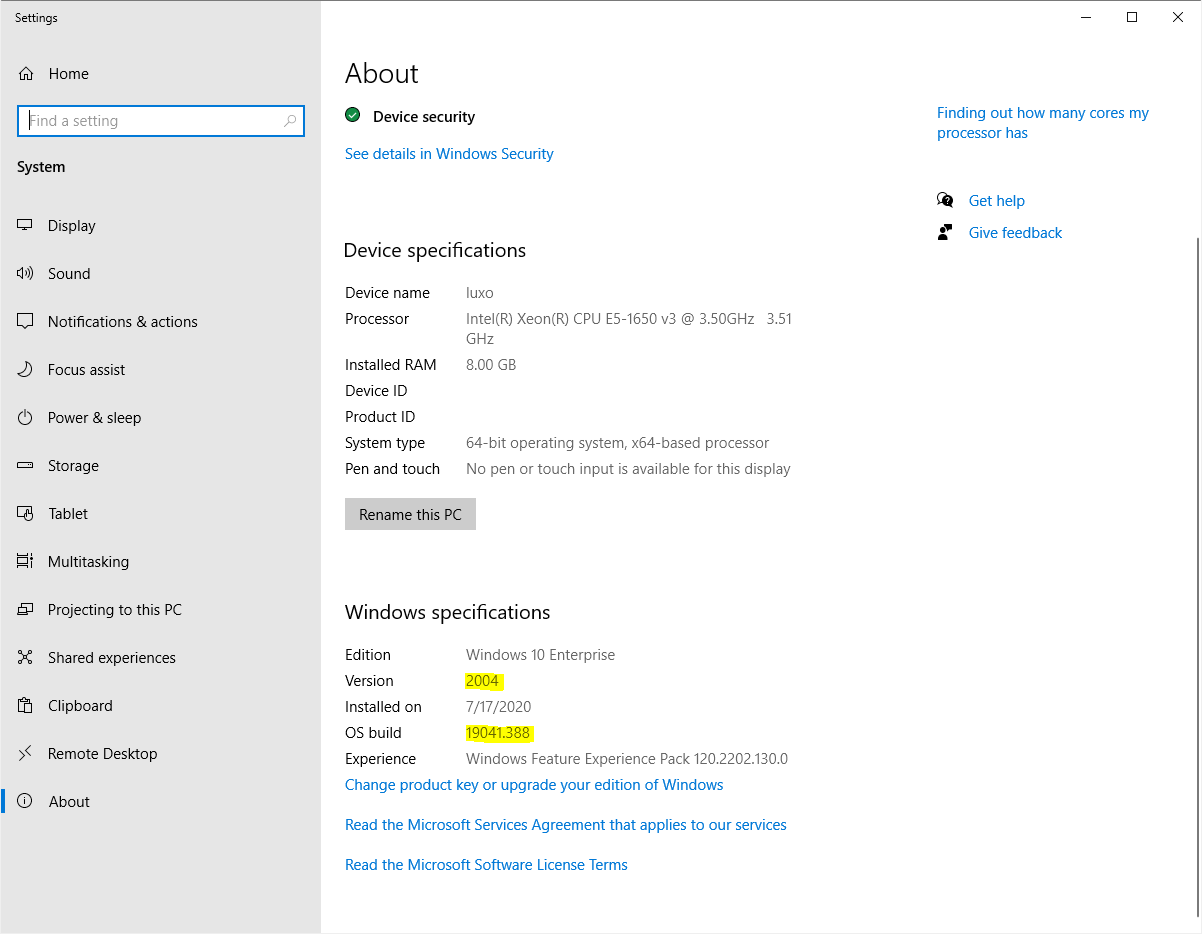 Next, we must install two additional Windows features to enable WSL support. Open a PowerShell window as an administrator. Type “PowerShell” in Windows Start and select “Run as Administrator”. 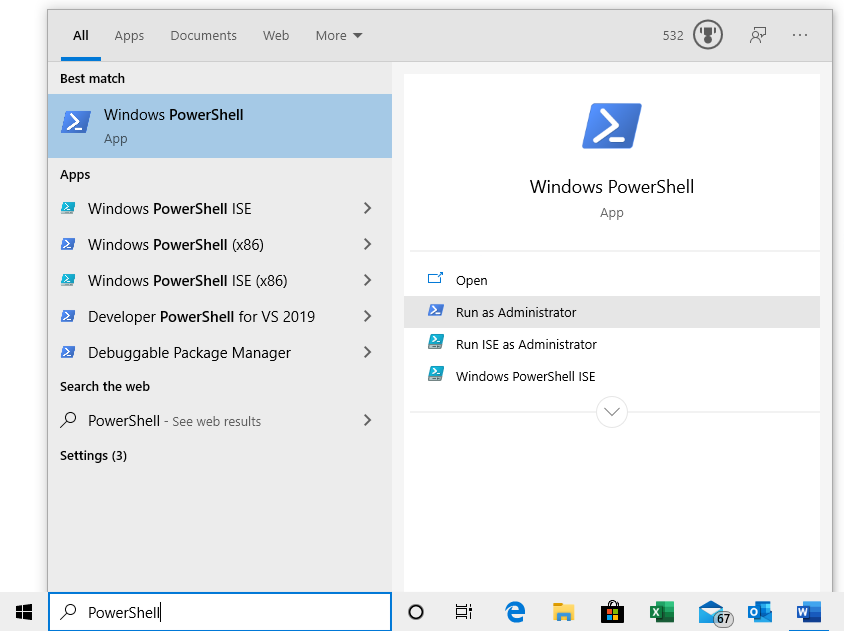 Windows will ask you for administrator access. After you accept a new command line window will appear. Type in the following command to install WSL:

Next, enable the VirtualMachinePlatform feature using the following command:

Again, open PowerShell as administrator and run the following command:

This command ensures that all future Linux installations will use WSL version 2.

Next, we need to install a Linux distribution via the Microsoft Store. Install Ubuntu 20.04 LTS. Once installed, you can launch it like any other application from the Start Menu. 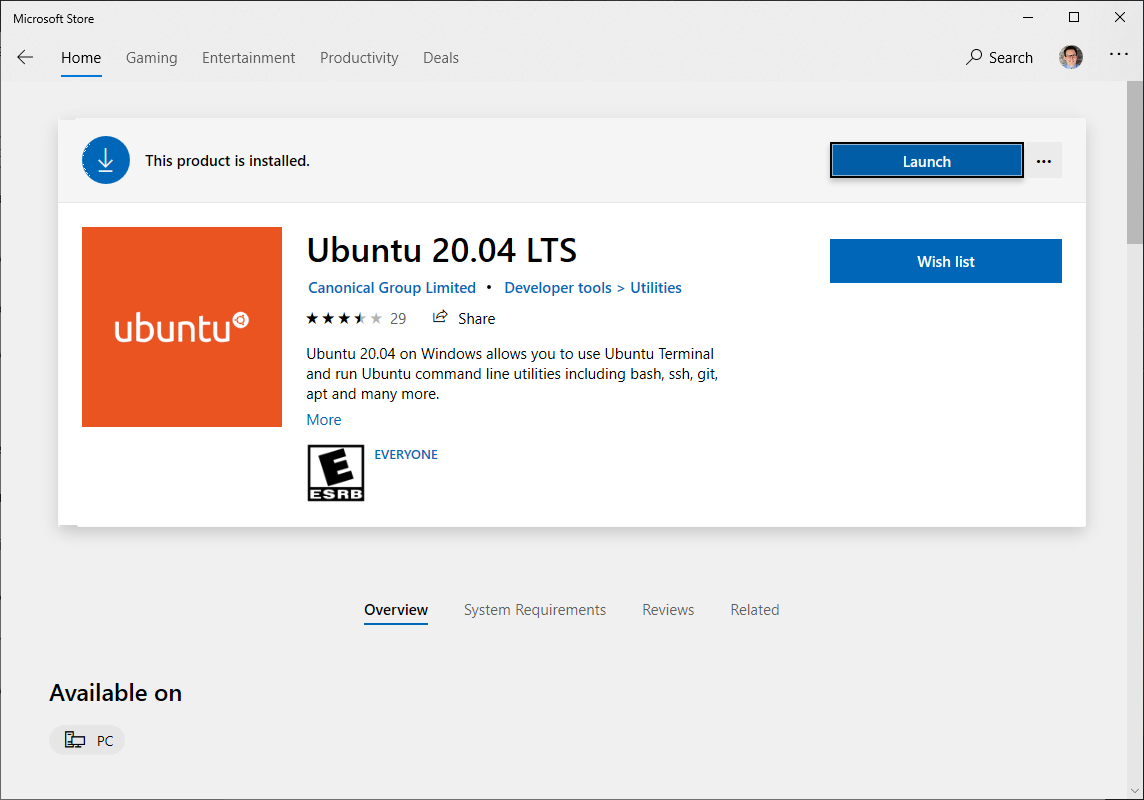 The first time you launch the Ubuntu Linux console, it will prompt you for a UNIX username and password. You will need this password to perform sudo commands later. Once completed, your Linux shell is ready for use. All your actions and commands will run as the Linux user you specified. 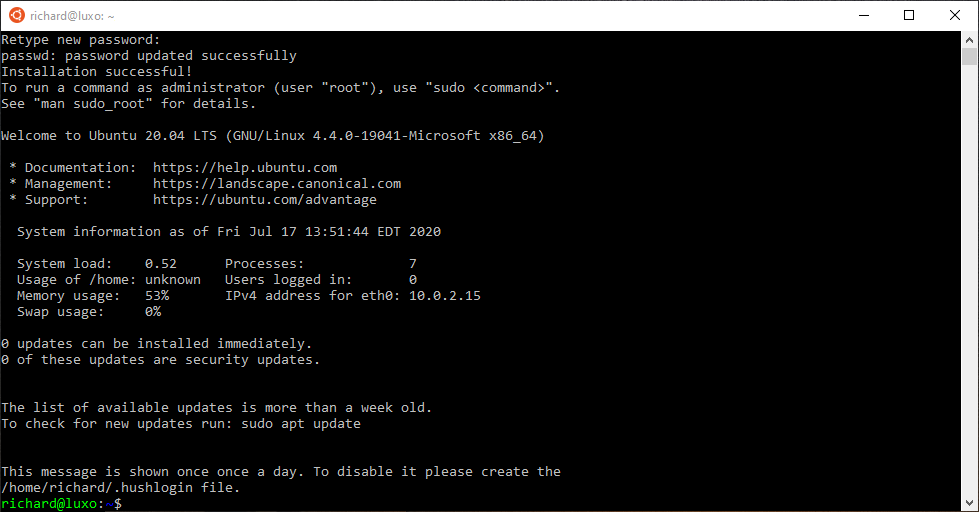 All hard drives in Windows are accessible in the /mnt directory in Linux. E.g., WSL maps the C:\ hard drive to the /mnt/c directory. That means you can access your Windows User directory in /mnt/c/Users/<WINDOWS_USERNAME>.

The Windows Explorer can also access the Linux filesystem. To illustrate this integration, open an Ubuntu console and navigate to a directory of your choice. To view this location in Windows Explorer, use the explorer.exe . command (do not forget the dot!). 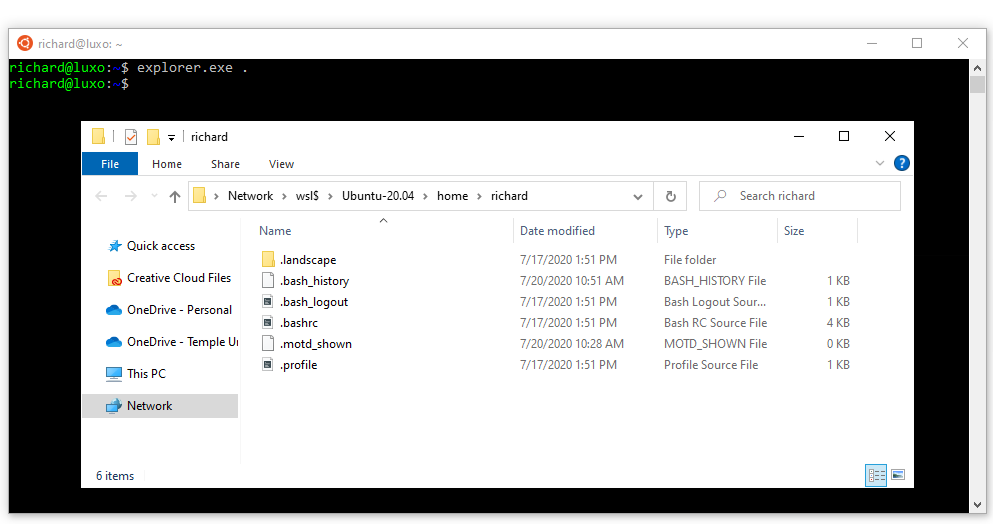 You now have a fully functioning Ubuntu installation and can follow most guides to install LAMMPS on a Linux system. Here are some of the essential steps to follow:

Before we can begin, we need to download the necessary compiler toolchain and libraries to compile LAMMPS. In our Ubuntu-based Linux installation, we will use the apt package manager to install additional packages.

Next, install the following packages with apt install:

Obtain a copy of the LAMMPS source code and go into it using cd.

Configure and Compile LAMMPS with CMake

There are countless ways to compile LAMMPS. It is beyond the scope of this tutorial. If you want to find out more about what can be enabled, please consult the extensive documentation.

To compile a minimalistic version of LAMMPS, we’re going to use a preset. Presets are a way to specify a collection of CMake options using a file.

This command configures the build and generates the necessary Makefiles. To compile the binary, run the make command.

The -j option specifies how many parallel processes will perform the compilation. This option can significantly speed up compilation times. Use a number that corresponds to the number of processors in your system.

After the compilation completes successfully, you will have an executable called lmp in the build directory.

Please take note of the absolute path of your build directory. You will need to know the location to execute the LAMMPS binary later.

One way of getting the absolute path of the current directory is through the $PWD variable:

Let us save this value in a temporary variable LAMMPS_BUILD_DIR for future use:

The full path of the LAMMPS binary then is $LAMMPS_BUILD_DIR/lmp.

Now that we have a LAMMPS binary, we will run a script from the examples folder.

Switch into the examples/melt folder:

To run this example in serial, use the following command line:

To run the same script in parallel using MPI with 4 processes, do the following:

If you run LAMMPS for the first time, the Windows Firewall might prompt you to confirm access. LAMMPS is accessing the network stack to enable parallel computation. Allow the access.

In either serial or MPI case, LAMMPS executes and will output something similar to this:

It is cumbersome to always specify the path of your LAMMPS binary. You can avoid this by adding the absolute path of your build directory to your PATH environment variable.

You can then run LAMMPS input scripts like this:

Note: the value of this PATH variable will disappear once you close your console window. To persist this setting edit the $HOME/.bashrc file using your favorite text editor and add this line:

If the LAMMPS executable lmp has the following absolute path:

the PATH variable should be:

Once set up, all your Ubuntu consoles will always have access to your lmp binary without having to specify its location.

If you are completely new to Linux, I highly recommend investing some time in studying Linux online tutorials. E.g., Tutorials about Bash Shell and Basic Unix commands (e.g., Linux Journey). Acquiring these skills will make you much more productive in this environment.